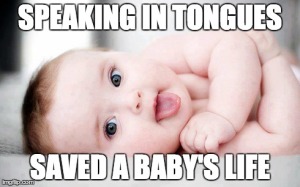 Speaking in tongues and healing are two highly controversial topics for the modern church. I’m not sure why, since the bible is quite supportive of both. But nonetheless, these are two subjects that many Christians are unsure about.

Here is a personal testimony that validates both.

Maybe five years ago, I woke up in the middle of the night concerned about a baby. I really don’t know how else to describe it. I couldn’t tell you whose baby it was. Was there a baby in trouble? Did I really want a baby? Did I just want to watch “Look Who’s Talking”?

I didn’t know. I just knew that I had been wakened from a dream about a baby, and I needed to pray.

How do you even pray for that? If I asked you to pray about a baby and gave you no other information, would you know where to start? I didn’t know who the baby was. I didn’t know what the baby needed. I didn’t even know if there was a baby. I just knew I needed to pray.

So I did what the bible instructs us to do when we don’t know what to pray for: I prayed in other tongues (Romans 8:26).

After about five minutes, the urge to pray relented, and I went back to sleep, still not knowing who the baby was or what was going on with the baby, but trusting in God to take care of the situation.

And then the weeks passed, and I forgot all about this episode.

About a month later, I was teaching at our Young Adults service on the subject of praying in tongues. About half way through my message, I was reading Romans 8:26 and was reminded of the baby, so I quickly shared the story.

The service ended, we packed up the church, Cheyne and I headed home, and we went to sleep.

The next day I received a phone call. It was a girl who had attended our church for the first time the previous night. She shared with me that her older sister was pregnant, but had had major complications and was rushed to the hospital about a month before. The doctors had expected to lose the baby, but supernaturally they had managed to keep the child alive. For the entire month, the mother had been hospitalized, still pregnant with the baby and unsure whether either of them would be okay.

The girl on the phone was convinced that the baby I had prayed for was her sister’s baby, and asked if we could visit them at the hospital and pray for the sister.

I talked with Cheyne, and we decided that it’d be best if Cheyne went to the hospital to minister to the soon-to-be mother. Upon Cheyne’s arrival, she learned that the sister used to be a Christian, but had since walked away from God. The doctors weren’t sure if the baby would survive the pregnancy, and the mother’s health was at risk as well.

Cheyne sat and talked with the girl about everything that had happened in her life. The girl then rededicated her life to God, and told Cheyne she believed God was able to heal her and save her baby. Together they prayed for the health of her and her child, and Cheyne came home.

The mother ended up completely recovering, and was discharged from the hospital a couple of days later.

And that, my friends, is how praying in tongues saved a baby’s life.

3:16 am. The family is finally asleep. But of course, that’s not gonna last long.

Maybe he’s in dire need of a diaper change. We check, but the diaper is clean. Jack continues to cry.

Maybe he’s cold. We give him a blanket. Jack continues to cry.

Maybe he’s warm. We strip off the onesie. Jack continues to cry.

I know. He just needs some bro time. I take him downstairs, and walk through our darkened kitchen with him gently cradled in my arms.

For about seventeen seconds.

Then he continues to cry.

And as I continue to pace back and forth with our crying infant in my arms, I think to myself, “If only he knew how to articulate what he needed, then I could give it to him.”

And right as that thought came to mind, God said to me, “That’s why most prayers don’t get answered.”

Christians are really good at crying. Experts, in fact. “Why does this always happen to me?” “Why do things never work out in my life?” “Why doesn’t God answer my prayers?”

We are very good at vocalizing how terrible things are. We are also fairly decent at (erroneously) attributing all of our woes and troubles to God. But I’d venture to guess that 9 times out of 10, we never actually ask for a solution. We just whine about whatever is going on, then blame God when things don’t get better.

For example, if you feel a fever coming on, complaining about how you always get sick isn’t praying. Accepting the sickness because “God works in mysterious ways” also isn’t praying. Even silently hoping that you miraculously get better isn’t praying. To make it a prayer, you need to verbally ask God to heal you. Confessing a scripture or two that promises to give you what you need is an absolute plus (in the case of sickness, Isaiah 53:5, Exodus 15:26, Luke 9:11, 1 Peter 2:24, and James 5:15 are just a few). Then you need to sincerely believe that God will deliver. And to finish it off, promptly praise God for His goodness and mercy and love.

That’s the prayer of faith.

My son Jack couldn’t tell me what was wrong because he doesn’t speak the English language. He’s just a baby. And most Christians are unsuccessful in prayer because they don’t speak the language of faith. They are spiritual babies. Now Jack will naturally grow up as time progresses. But Christian growth isn’t automatic. It takes deliberate and intentional action. And unfortunately, most people are unwilling to put in the time.

The language of faith is simple:

So stop complaining, stand on the Word, and have faith in God.