Cheyne and I reveal the gender of our baby. I may look surprised, but I already knew. It’s called “acting.”

We had our baby shower about a month ago. Beforehand, I was given the following questions to answer for the shower. Thought you guys might like reading through it.

1. If the baby could have a superpower what would it be?

The ability to have any superpower it wants.

2. What do you want the baby to be when the baby grows up?

Human.  Also, preferably not a Belieber.

3. What college would you want the baby to go to?

Somewhere close.  And somewhere that doesn’t have the word “fashion” or “burger” in the name.

4. If the baby could be a superhero, what superhero would you want the baby to be?

Superman.  Duh.  He can do everything.

5. What physical characteristic of your spouse do you hope your baby has?

If she’s a girl, then all of ‘em.  Hair, eyes, smile, and the rest.  If we’re having a boy, then definitely Cheyne’s biceps.  Cheyne is freakishly strong.

6. What personality trait of your spouse do you hope your baby has?

Her passion.  If the kid is born with that, he’ll change the world.

7. What physical characteristic of yours do you hope your baby has?

My beard. Hopefully not immediately though, as that probably wouldn’t be convenient for the birthing process.

8. What personality trait of yours do you hope your baby has?

9. What of yours do you hope your baby doesn’t inherit?

My webbed toes and back hair.  Also, my inability to dunk.

10. How old will your baby be when they lose their first tooth?

Hopefully before the next “Mother’s Day.”  I have a great idea for necklace…

Twelve.  I figure if Cheyne says “two” and I say “twelve,” we can compromise at “four” and I’ll look like a caring, understanding guy.

12. How old does the baby have to be before he can date?

Whoever wants to be the favorite grandma.

14. What are you most looking forward to about being a parent?

Getting to tell other people how to raise their kids.

15. How long do you think labor will last?

Fourteen seconds.  Speakin’ it by faith. (Air-fives my wife.)

This mean little girl snuck into the shower and punched me in the gut!

16. Who is most likely to faint during delivery?

The nurse.  When she sees how handsome my son is.

17. Who will cry more when their baby will be born?

Probably me, unless “Titanic” is playing in the delivery room, in which case, tie.

18. How did Cheyne tell Garrett she was pregnant?

She woke me up at 5 AM on the morning of August 12th.  I had feared that she found out I had replaced her “special” medicine with Tic-Tacs.  And I guess to some degree, she had.

19. What are Cheyne’s pregnancy cravings?

One Tree Hill marathons and baths.

20. What was the most challenging thing about being pregnant?

My body being stretched and warped beyond reason, having to get up six times a night to pee, gaining thirty pounds, and having to squeeze something the size of a watermelon out of my body.  Oh wait, that was Cheyne.  I haven’t been inconvenienced all that much.

21. What is your must have baby item?

Diamond Blu-Ray Edition of Braveheart.  Or as we call it, “School.”

22. How much will your baby weigh?

Let’s go with seven pounds.  I made the mistake of accidentally saying “ten pounds” last week to Cheyne (which apparently is a big number), and I was harshly rebuked for my unbelief.

23. How will you handle temper tantrums?

Duct tape.  They’ve worked well so far.  Oh, you mean for the baby…

Our Ouija board.  The magic 8-ball had said, “Ask again later,” but we didn’t have time to wait.

Baby can get a job if he wants to drive.

27. When will you start saving for college?

There are these things called “scholarships” nowadays. Lil’ Milo can get straight A’s if he wants to go to college…

Can’t we let the baby decide?  I mean, it is the 21st Century after all, and my insurance isn’t the only thing that’s Progressive…

29. What do you think will be the biggest lifestyle change when becoming a parent?

30. What game/toy are you most looking forward to playing with your baby?

Setting the rowboat up in the backyard and playing with our “imagination.”

That will be obsolete, because my baby will be an angel and never do anything wrong. 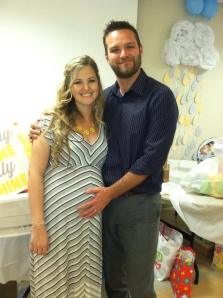 Cheyne and I at our baby shower.